As we all know, running a successful business doesn’t happen overnight. Dustin Tester, founder and director of Maui Surfer Girls, tells us about her A-Ha moment, when she almost threw in the towel, and when she finally realized her business was a success, 12 years later!

How did the idea of Maui Surfer Girls get started? 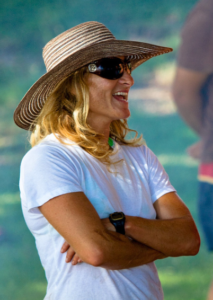 Dustin Tester: At Prescott College I did my senior project on creating a rite of passage for teen girls using a wilderness setting, journal writing, and storytelling to build self-esteem.  I was doing a whitewater kayaking trip down the Dolores River in Colorado with my Adventure Education class, and the a-ha moment hit. I love water sports & grew up in Maui surfing, which instilled self confidence in me. I decided to put my thesis project to practice back home in Maui, using surfing and a community of strong female role-models to build self-esteem in teen girls. Maui Surfer Girls was born the summer of 2001, with 17 girls attending our first 2-week program.

Dustin Tester: Exciting and pretty scary at times. Our first year was a total success, but the summer after 9-11, parents weren’t sending their kids on airplanes. We had only 7 bookings, and were going through the growing pains of running our program with new staff. I almost threw in the towel that second year. In 2003, the movie Blue Crush hit and every girl in America wanted to learn how to surf. We were mentioned in Time, Seventeen, and Teen People. Our third year was a huge success with over thirty girls attending three weeks of camps. So it’s been a roller coaster ride, but I committed to my dream and buckled in for the ride ahead.

When did you know the business was a success?

DT: Honestly, after the recession in ’08-’09 we were back in the red and our 10th year camp wasn’t financially viable. After 10 years I still didn’t feel like we were in the clear as a business. Our surf school picked up some slack during the year, but it wasn’t until Trip Advisor listed us as the #1 activity in Maui in 2012 when we really turned the corner. When our camps consistently filled alongside our busier surf school, then I felt like I was a success, 12 years later!

What are the challenges of running a tourism business on Maui?

DT: Competition is steep, especially for surf schools. When I started there were only about ten surf schools. Now there’s at least twenty companies on Maui offering surf lessons, several of which are running without permits. Competing with the bigger surf schools of Lahaina and Kihei was tough enough. Now we’re competing with all the illegal ones too. 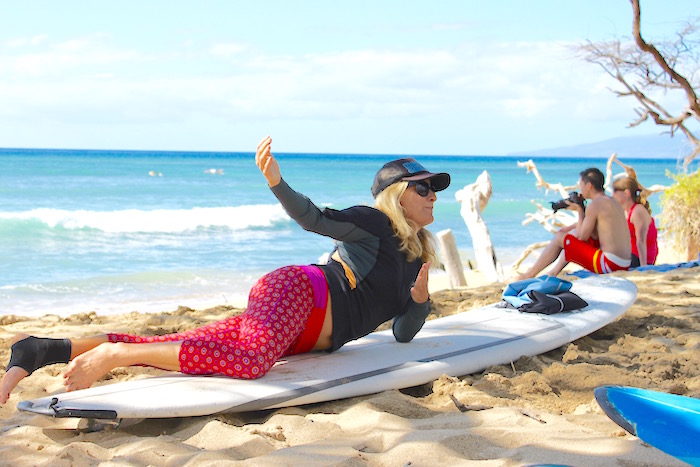 What sets your surf school apart from the others?

DT: I think the ‘ohana (family) we’ve created sets us apart. Families come back to us every year because we make our students feel apart of our family. The instructional team I’ve put together has such a high standard of professionalism and genuine care of our students, that we do achieve our mission one student at a time: empowering them through surfing. We take pride and passion in helping people overcome their fears and achieving their surfing goals. Most schools just give the merry-go round ride, without that personalize dose of surf stoke and aloha! We are a “green” surf school & teach about how to protect our reefs, Hawaiian culture, and oceanography too. We are also female owned and operated, with women as the majority of our instructors!

Where is MSG going in the future?

DT: My long term vision for MSG is to create a “home base” for our surf school and camps in Maui.  We want to purchase a property and build the best surf camp & experiential education facility in Hawaii. We’d love to host groups to use our facility, while running year around programs for women, special need populations, couples, and families. We look forward to giving back to our community by offering experiential education programming for local kids. I know how much I learned at Prescott College, using adventure education as a tool for personal growth. I’d love for my community to also benefit from my network of amazing surf coaches and experiential educators. I’m also looking forward to offering more international surf trips for our kama’aina and mainland students. 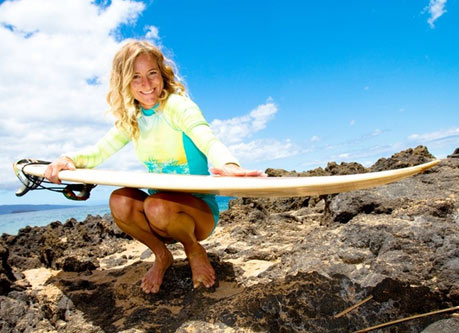 What are you most proud of?

DT: More than being successful in business for 15 years now, I’m most proud of the lives I’ve impacted, and the connections I’ve made with all my students and campers throughout the years. Two of my campers that I’ve mentored since they were 14, now work for me at my surf school and camps. Lucy Woodward, attended our 2nd year camp in 2002 and hasn’t missed a summer yet. Lucy has been my assistant Camp Director for three summers and full time surf instructor through the year.  Both Lucy and Gaby are like daughters to me and it’s been so awesome to create such amazing memories both in and out of the waves!