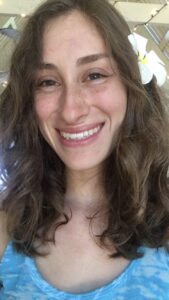 Hi, I’m Anna Sophia! I’m currently finishing my fourth year at the University of Central Arkansas and first semester of a new major. I was a pre-vet biology student until this semester, when I changed my major to vocal performance. I’m planning to go to grad school, then start a career in opera!

I probably should’ve realized sooner that music was the right path for me, since I come from a family of musicians and I’ve been playing piano since I was four. I also played flute since fifth grade, upright bass for three years in high school, a little bit of  guitar, and I’ve sung since I could talk, but I started choir in seventh grade and have continued since then.

In college, I’ve played piccolo in marching band for four years, flute in concert band for four years, sung in concert choir for two years, and sung in opera for a year. Outside of music, I’ve been working at Hillcrest Animal Hospital in Little Rock Arkansas every summer for 7 years now. I love animals and I love medical stuff, so it’s a great job for me! When I’m not working, playing music, or in school, I love to be outdoors! Hiking, camping, indoor rock climbing, or just taking a nice walk in nature are things I love.

The first time I went to Maui was in 2018 when I graduated high school. I went to a surf camp with Maui Surfer Girls, where I learned how to surf for the first time, had my first drink of REAL coconut water, received my first massage, and learned so much about myself! I felt so empowered and filled with happiness and love. I learned how to break down my own limitations that I had unknowingly created for myself and I achieved so much more than I thought possible in such little time. I was surrounded by the most powerful and inspiring women I’d ever met and it was truly a life-changing experience. Then, the next summer, I was fortunate enough to be selected as a CIT for the summer teen camp! There I got to go on my first camping (without a camper) trip while we were in Hana! The surf camp was so much fun and I loved seeing and helping these girls overcome fears and anxieties. Watching them break down their own walls just as I had done was incredible and fulfilling. Helping them reach for something even greater than what they’d already done was so much fun! I wanted to return as a CIT because I want to help other girls experience what I did. I want to help them learn to just LET GO! It’s such a liberating feeling that I can only get on the waves, and I hope to show others that beautiful feeling. I also want to help these girls learn to love themselves and realize their own strength, just as I did my first time in Maui. I absolutely can’t wait to hit the waves and build another ‘ohana with Maui Surfer Girls!